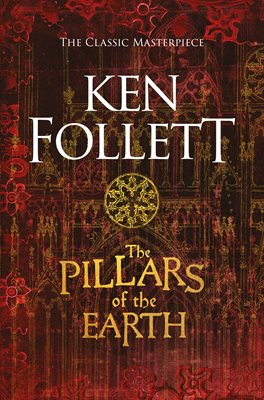 “When things are simple, fewer mistakes are made. The most expensive part of a building is the mistakes.” ― Ken Follet, The Pillars of the Earth

Ken Follett is one of my favorite authors. Mainly because he writes books made up of many stories of many people and shows how they merge and intersect. They are well researched and usually have a healthy dose of historical accuracy. He writes on the edge as well. He touches on stories that would be taboo in their time, but writes them in a way that is both knowledgeable and considerate.

“You never know,” Jack said speculatively. “There may come a time when savages like William Hamleigh aren’t in power; when the laws protect the ordinary people instead of enslaving them; when the king makes peace instead of war. Think of that – a time when towns in England don’t need walls!” ― Ken Follet, The Pillars of the Earth

He writes a good bad guy. Some are just outright horrible and his descriptions make you love to hate them while others are bad but likeable. Most of what I have read has had more than one bad guy which also is how our world works. Sometimes the bad guy is just the world itself. His characters tend to go through things that your everyday person might go through.

I picked up The Pillars of the Earth as a preteen. It was my very first historical fiction. Being over 900 pages, it seemed a daunting task to someone who had previously read nothing thicker than Goosebumps  and Animorphs. I’d already cut my teeth on romances from Danielle Steel and Katherine Stone. This book was a whole other creature.

The first few chapters gave me a more detailed look into the time in which it was set. There are just some things that schools and textbooks cannot include even as important as they may be to history.

“He wondered if he really was capable of it. Then he thought what a thrill it would be to create something from nothing; to see, one day in the future, a new church here where now there was nothing but rubble, and to say: I made this.” ― Ken Follet, The Pillars of the Earth

The book begins with the family of Tom Builder. He’s a man with big dreams, but the wrong circumstances to achieve them. He wants more than anything to build a cathedral. He wants to build high glorious ceilings and long open windows that will shed light into the grace of a house of God. To him, it was much more than a building. In his eyes, a cathedral is its own entity.

He has a wife he loves, two children, and another baby on the way. We meet him as he is building a house for the son of a wealthy man who is set to marry. When the wedding is called off and the son decides not to finish the house, Tom and his family are left destitute. Their luck steadily falters. As they are travelling by foot in search of work for Tom, tragedy strikes. I won’t go into detail for those that want to read the book, but Tom’s life will never be the same.

“She had resolved not to let people make her a victim, and she had proved she could keep her resolution.” ― Ken Follet, The Pillars of the Earth

Next we are introduced to Aliena. Her jilted betrothed ruins not just her life, but that of her family as well. She has to fight to survive and to live her life on her own terms. She is a bit of a flawed character which is why she is one of my favorites. She is proud and haughty and has to learn her lessons the hard way.

“How terrible, Jack thought, to be old and know that your life has been wasted.”― Ken Follet, The Pillars of the Earth

One of the most important characters, and my personal favorite, is Jack. Jack is intelligent but quiet. He is unfortunate looking and has been dealt a difficult hand. However, no matter what happens to him, he knows exactly what he wants and nothing deters him from it. His life is fraught with unfortunate incidents and circumstances. I can’t explain much more about Jack without giving away anything.

“The first casualty of a civil war was justice, Philip had realized.” ― Ken Follet, The Pillars of the Earth

Around the stories, there are political and religious issues, raids, and something similar to a civil war. The Catholic church and monarchs are working both for and against one another in true political form. Lies are told, lives are disrupted, and people are used for political and monetary gain. It follows the seesaw exchange of power.

The book at its heart is about cathedrals and the building of them. It compares the building to life and the lives that are going on around it.

If I had to say a book was my favorite, this would be it. It may be because it was one of my first serious reads, but I am quite partial to it. I was able to read it while on summer break and finished it within a few days. At first, I looked at the book and  wondered if I could finish it, and yet when it ended, I thought 900+ pages were not enough. It’s no secret that I highly recommend it.