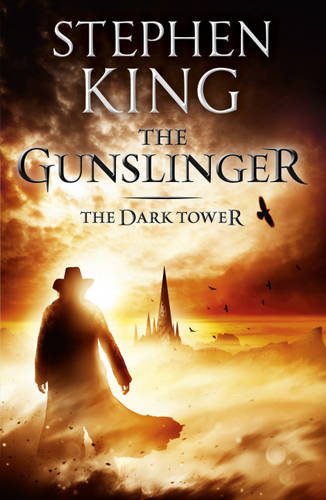 Stephen King is known for horror and suspense. However, for me, The Gunslinger is more a mystery of sorts or maybe the building up to a grand mystery. It is a different creature than the King books I’ve read in the past. It has a lot to offer the reader; like a really great gun fight scene that your imagination can run wild with. It still has the powerful descriptions, a bit of gore, and the wonderful macabre things we expect from the mind of Stephen King. For me, it is his rabbit hole.

“The man in black fled across the desert, and the gunslinger followed.” – Stephen King, The Gunslinger

Roland Deschain is not a hero. He is not a good guy, but he’s not a bad guy. He is a determined guy and a very complicated guy. He is everything I could ask for out of a character. He is the last Gunslinger. In a world that seems to be an alternate or dystopian future of ours, he is on a journey to seek out the man in black and kill him. The Gunslinger’s world is not so different from our own. You have those on drugs or devil grass as it is in The Gunslinger. You have a religious leader that makes me think of Westboro Baptist Church. You have crazies who follow the insane religious leader, and you have those who are possessed by something unknown. Sometimes, in our world as well as Roland’s, those last two intersect.

“My name is John Chambers. You can call me Jake.” – Stephen King, The Gunslinger

On his journey, Roland meets many people. He finds a town, he finds a lover, he finds a hippie farmer, and after all this, he finds Jake. I swear if I could pull a character from a book and into reality, it would be Jake. I would adopt him. He is a young boy who got mixed into something he can’t understand, and all he has in the world at this point in his story is Roland, the rough gunslinger who will not be deterred from his mission. Jake was in his own world, in his own time, minding his own business when he is shoved into Roland’s path.

Roland became a gunslinger at a very young age. He did so in a fit of rage that led him to the challenge to receive his guns. Roland relives stories about his childhood while traveling with Jake and gives us a glimpse at how he became who he is.

“I am the furthest minion of the Dark Tower. Earth has been given into my hand.” – Stephen King, The Gunslinger

The man in black is part of the mystery. He is always just out of the gunslinger’s reach. When you read of the actions of the man in black, you realize how truly evil his character is. He brings a drug addict back to life just so that he can prolong his suffering. Being a seer, he gives a barren woman a child that he knows will face an end. He does both of these things without a second thought and only to bring destruction. Roland seeks to end this and end him.

“Go then, there are other worlds than these.” – Stephen King, The Gunslinger

I hope after this review that you are standing at the rabbit hole. I hope you are intrigued enough to take the plunge. Make no mistake that this book is only the rabbit hole, though. This is only the beginning of the journey to rid the worlds of the man in black and finally see The Dark Tower. I am not half done with this series of books, but it has been a fantastical and suspenseful journey thus far. Be ready if you intend to venture into the rabbit hole. I recommend that you do, and if you do, then go, for there are other worlds than these.

***The remainder of this post contains SPOILERS. Plot and otherwise. If you intend to read this book, please stop at this point.

The Gunslinger begins with Roland trailing the man in black across the desert. He and his donkey are worn to the bone and suffering from dehydration and heat. Stephen King uses some of the descriptive writing here that I am so fond of. They come across a small house where a dweller lives. He offers shelter and food. Roland accepts and sleeps. The dweller, Brown, wakes Roland to let him know that the donkey has died. The man has a raven named Zoltan that mostly spews nonsense and silly things.

While visiting, Roland tells Brown the story of himself and the town called Tull. Entering town, he finds that it is not much more than a few buildings and a saloon. He goes into the saloon and meets the local druggie who is on the wasting drug they call devil weed. He takes the barmaid as a lover, and she fills him in on some of the locals. She tells him how the man in black came in on the same day the druggie, Nort, died. She explains that the man in black brought the dead man back to life.

Roland’s lover, Allie, tells of the local crazy religious leader whom she says preaches poison religion. The woman, Sylvia, calls Roland an interloper and turns the town’s people against him. She has been touched by the man in black. Between the living dead druggie and the crazy religious lady, the trap set for Roland is set into motion and ends with the one of the best written gunfights I’ve read to date.

Roland moves on and comes to a way station where he finds the boy, Jake. He goes down into a cellar and faces a demon. He leaves with Jake and travels through mountains and tunnels. They come across slow mutants and other issues. Roland tells Jake the story of his youth and how he earned his guns and became a gunslinger at an unheard of age. Jake comes to realize that if he continues on with Roland that he will die. Roland knows this as well.

In the end, Jake is lost and Roland faces the man in black, but this is far from the end of the saga. Read on, my friends.