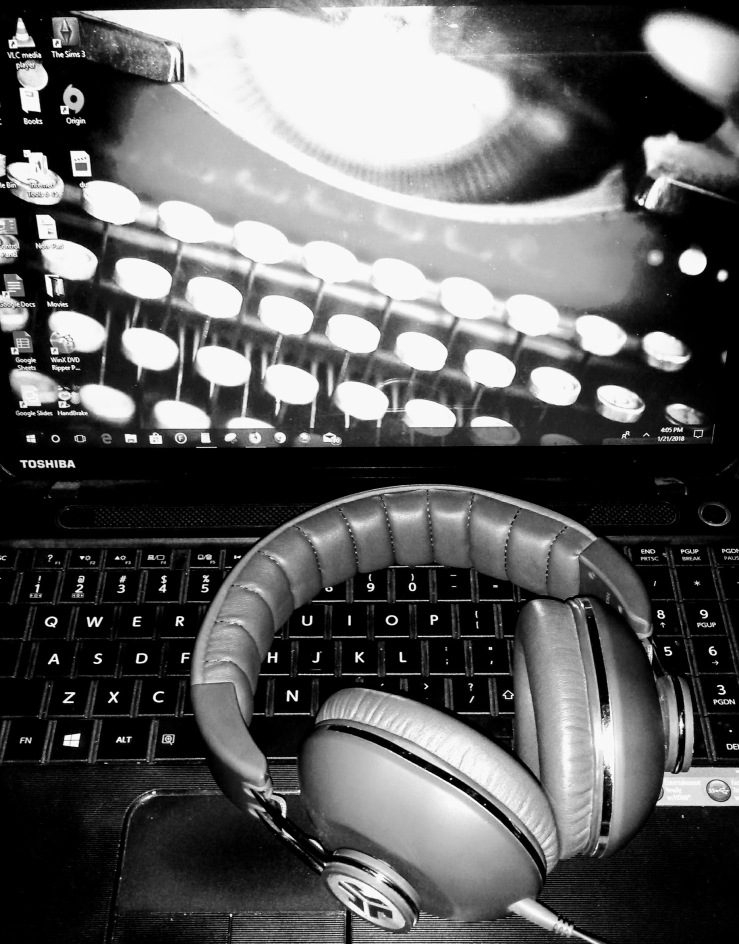 I’ve been frustrated lately. Creatively frustrated. I’ve been mad at my computer for something it did not do. I’ve been angry about it’s blinking cursor and blank pages without words. I’ve felt dried up and uninspired. I thought maybe if  I went back to the fundamentals. You know, pen to paper. I put pen to paper and waited for something to happen. The only thing that happened was that I scribbled and scrabbled and got even more frustrated.

I’ve words and stories a-plenty in my brain, swirling about in a never ending vortex. I just can’t get a good connection between my brain and my fingers. I’ve tried all the usual suspects to no avail.

I’m discouraged with my inconsistency. My last blog did really well in terms of views and visitors. I think I’ve gotten intimidated by it. Doubts and insecurities can wreak havoc on one’s creativity. I came to the conclusion that I should write about being uninspired and insecure and all those things going on with me.

I’ve sat down numerous times with my computer and determination only to be let down. I’ve put on my game face, tightened my ponytail, and set my teeth only to give myself a headache. In this case, headache leads to heartache because I am disappointed in myself.

After searching WordPress, I’ve found I’m not alone. There are lots of creators out there with brains and hearts on hiatus. I found I’ve been more inspired these past few hours from the one thing that calms and helps always. Reading.

I wish that I could say I’ve been reading something new, but I can’t. I’ve discovered in recent years that I am a rereader. I’m not sure that’s a word. Microsoft Word says no, but I’m going with it. I’ve been reading something that I’ve already read and using it as a comfort. There’s no anxiety, no rush, no suspense. It’s just me and old friends I’ve known for a while taking a stroll down memory lane. It’s reading words that are familiar and seeing something new in the pages.

Stress is more than likely a factor in all this. I find the best stress relief is to go from cover to cover. It’s like a salve for achy head and heart.

I’ve been writing more fiction in private than things I wish to share on my blog. I love my blog. I’m proud of it. However, I’ve recently alienated myself from it. I’m not happy about this and intend to change it. Hitting a brick wall when you want to be on an open highway is frustrating to say the least. I’m slowly taking a pickaxe to it. Please be patient. I’m undertaking an uphill battle in my writing life. There is so much I want to say, and my brain is failing me.

I’ve lived in Magee nearly all my life. Zip burgers have always been considered the best burger to be had. I grew up on them, and they are wonderful. However, that’s a blog for another day.

Hidden back behind the old elementary school in Magee, Mississippi is a gem of a burger joint. The exterior doesn’t look like much. It’s to-go only and is ran by a sweet lady who makes a mean burger. It’s so good she named the main item after herself.

The Becky Burger is a big beautiful hunk of meat with cheese between buns to match  with your usual burger toppings. My husband likes his with bacon. The meat has a terrific flavor and is hard to eat without making a mess. You’ll end up with juicy goodness running down your chin. I usually get tots with mine. This time I got tots with cheese. 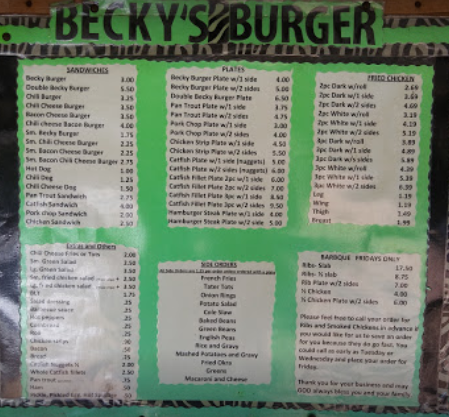 The menu has something for everyone. The picture I have is not a very good one but shows the large variety they offer. How do they fit all that food in that little building? The world may never know, but boy am I thankful. They offer ribs on Friday which I’m told are wonderful. A member of my group got fried chicken. The breast was huge and was tender and tasty, and everything you want fried chicken to be. The pork chop was also mighty fine. Although I’ve never tried it, I’ve heard Ms. Becky makes a mean salad.

We set out to get our Becky Burger order almost bouncing with anticipation. We arrived to find the parking lot full and customers like us who were ready to get their grub on. Having to park on the street was no big deal. I am a supporter of local businesses in our area. It makes my heart happy to see any small business busy and doing well. We made our way up the window to pick up our order. Greeting other customers, we chatted for a bit being early and our food not quite ready.

Once back home, we divided up our grub and commenced to feast. Other than talking about how great everything was, we barely said a word. Even with our special requests, no tomatoes on this one, no lettuce on that one, and even gravy on fries, we got what we asked for and enjoyed every bite.

With a belly full of goodness from our favorite hole in the wall, I recommend you seek it out and experience it for yourself.

New Years Eve, I planned to make a huge pot of potato soup. You can’t go wrong on a cold day with hot potatoes, ham, sautéed onions, and parmesan cheese.

So, a run to the local grocery store was in order. We’re seeing record low temperatures for central Mississippi. I had the following conversation with every person I met:

“And only going to get colder. Happy new year.”

If Southern folks can’t agree on anything else, the consensus is usually the same on cold weather and ice. My cashier said that they were running low on milk and bread as is the norm for extreme weather in Mississippi.

My soup was tasty and my cornbread was pretty and also tasty. I haven’t made a sweet potato pie in a while so that was on the menu as well.

My husband’s Mimi and mom couldn’t make it so me and my best bud took them a big bowl of soup, cornbread, and pie. Molly enjoyed visiting and had to sniff out the whole area.

I decided that my inner child would enjoy some fireworks. Tony is suffering from a bad cold so he stood in the back door and watched me fire off a few. After a few minutes, I knew it was too cold. I headed in and got in my warm pajamas, fuzzy house shoes, and cuddled up under my blanket.

While Tony and I watched t.v., I reflected on my year.

Better me and all that means.

I remember being a little girl and seeing my Papaw standing at the edge of his garden and looking out across it. That particular time was early evening. His feet were planted firmly, his mouth set, and the look of a man who knows his land settled on his face. There was power there and pride. He put his heart into his garden and took pride in that it would help to feed his family.

When he turned to look at me, he smiled and said, “Come on, gal. Let’s get pickin’.” I would hold out the hem of my oversized t-shirt and use it as a tote as I trailed behind him holding the fruits of his labor. When it was full and too heavy, I waddled back to the house to turn what we’d collected over to Mamaw.

Then, when the work was done, we’d sit in the swing and sing. Sometimes I sang along, others I just listened. His voice carried tones of the old south and emotions set to melody. He sang of pain and love and told stories in song. Some of the old and some of the new and some he probably came up with as he went along. His voice was country with soul and blues and something particular to him.

I remember riding along with him on the lawn mower and “helping” him push the tiller to turn the soil. I wore his too big gloves and dropped seeds and made every step he made. I listened to tales of him growing up. I wish desperately I could remember more.

He kissed booboos and dried tears. We giggled and smuggled candy and watched many a-sunset. He would twirl me around until I couldn’t stand and laughed at all the silly things I did.

At his funeral, I listened to one of his closest friends tell of a day in 1956 when some rowdy boys visited Weathersby Baptist Church because they heard the girls there were pretty. Mamaw was one of those girls. She’s told me before how she and my Paw met at a peanut boil at church. Brother Johnny said that on the day he recalled that Paw answered alter call and accepted his Lord at the front of the very church where he met my Mamaw, and the very church where we were currently having his funeral.

He said that out of that group of boys and the pretty girls at Weathersby, my Paw was the only one to find his girl and get married.

My grandmother used to talk about how they were married in a house with cracks so wide in the floorboards that you could see chickens walking beneath them during their wedding.

My grandparents were always simple people. They worked, loved, and lived in a simple, old fashioned way as husband and wife for 61 years. I’ve tried to imagine 61 years worth of living much less marriage. I’ve watched my grandmother, my Mamaw struggle with his death. I watched her before he passed sit beside him and hold his hand. She would rearrange his blanket and hang her head.

Today, he would have been 80. We’ve lived a few weeks without him. His void is definitely felt. However, I find peace in knowing that he is breathing fully on his own again and walking wherever he wishes to go. He has left the struggles of this world and his earthly body. His sun has set.